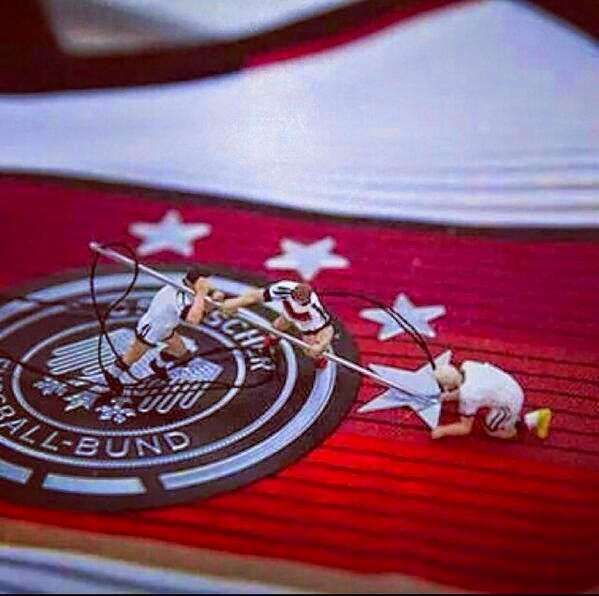 Since 12 years ago, I decided to love this team. That was the moment when I was a sick kid. I’m dying to love football and Germany. In World Cup Final 2002, Oliver Khan who was the keeper can’t deny the power of Brazilian player, Ronaldo. Ah, it was soo long time ago 2- 0 for Brazil victory. I have no idea back then. Talking about 2002, Miroslav Klose, our lovely legend won the silver medal as Germany was placed second. And he’s 36 now. It’s time for him to retire and hang on his shoes :”
Another World Cup I always remember was in 2006, held in Germany. Sadly, being the householder couldn’t make Germany win the World Cup. Germany ended up being in 3rd place after beating Portugal with score 3- 1, well that was bronze medal for Klose hihihi. I was kinda crazy back then, shouted loudly in teachers office w my pals in Junior High when we’re holding an event at school. Aaaa, I miss that moment. I miss my 2006 back!
The next four years was FIFA World Cup 2010 which held in South Africa and Waka – Waka song became the loudest soundtrack there hohoho. I kinda desperate at that time, as a new graduated student I was in my waiting time for university stage to come. That semifinal moment when Spain won over Germany I cry so hard in my uncle’s house, they support Spain and I get bullied for my fav team lost 🙁 And then, they ended up being the 3rd again. Ah, I was so saaaad that it’s bronze medal again. Brokenhearted </3
And finally it’s now, this FIFA World Cup 2014 in Brazil where Germany can break the curse that European country can’t win in America Latin’s land. It will be crazier If I’m still in my college life since there will be ” nobar” everywhere with my pals. There will be crazy shouting from our house in Paus, and there will be some kind of guessing score thing. And I kinda miss the bullying everyone used to do #ooopsie
Since I’m home, I watch the matches in my neighbour house. It sucks when I’m here and the channel got censored at home. Every night I watch the match in my neighbour house, my cousin’s house. It’s like knocking someone’s home near midnight and disturb their sleeping time. Please forgive me~ I don’t wanna miss the match, Germany especially.
I was in a total worry when it’s time Aljazair vs Germany. Luckily it ended up being good way to Germany. Another thing is, Germany can beat France thanks God to semifinal. And in semifinal, it was a good air that Germany can do the revenge for get beaten in World Cup 2002. :”) I bet Germany would meet Holland in final but I wrong, and it’s Argentina. Hmm
I can’t wait for the Final match, I’m tired of such copras capres news and quarrels everywhere. I stay awake all night just in case not to miss the match. I go out in a windy cold early morning, having “nobar” in my neighbour house, well I’m the only girl while the others are men with their cigarretes on. It’s okay, I wanna watch the match. Anyway Germany vs Argentina is such a boooooring match until the time’s over. I was in a deep worry since Argentina used to play in additional time and penalty kick when beating Holland. No no no please, my stomach’s sick, I’m dying and biting my nails everytime Leo Messi or Higuain runs near the wicket (?)
It was almost an end when Neuer and Higuain bumped into each other. Ooow, it must be hurt. And I frustate myself and a bit disappointed when the bloody accident of Bastian Schwensteiger >.< Why blood why? But its okay since in the additional time, Mario Gotze can give one and the winning goal for Germany. I am so happy! Alhamdulillah after waitiing for a loong time, welcome champion of FIFA World Cup 2014. Willkommen in der Weltmeister Deutschland! :))
As for Klose, he can now retire in a good way. Two goals in 2014 World Cup, and be a legend for being top scorer in World Cup. Hello 36 years old salto man, I’m happy for you Idol for the girls hahaha.

As for Schweinsteiger, such a gentleman. Ah I’m so touched.

For Mesut Ozil, you can now have your fasting time. You’re still one of my favourite ones ~ But, the tattoo, ah -__-” Anyway Happy Fasting in Ramadhan
For Neuer you are great dude, you can have the same achievement like Mr Oliver Khan, ciyeee Golden Glove, ciyee best goalkeeper World Cup 2014 yeaaay.
For Gotze who’s 22 years old he can break the curse for bringing Germany win. I’m 22, the same age, still  in waiting for TKD and ah everything will be alright 🙁
For Khedira, aftern winning with Madrid congrats for winning with Germany too.
For Muller, youuu are still awesome 24!Andrew Garfield twin from Germany Hahahahha
And as for this mister, your face still looks young as always anyway. Finally, you did it sir. 🙂
And how it ends, FIFA World Cup 2014, Germany wins, but still Argentina is a great team too. I feel happy and sad the same time, happy for my fav team winning, completing my happiness for Madrid before, but sad for the end of this World Cup event. Another sad thing is the waiting for TKD still goes on. Well everyone, thats how I tell you about this team I love. For STANers 2010, we still have to pray for TKD, be ready, study and will have our celebration after placement. Ameeeeen :))

Anyway, this quote is funny :

See ya everyeone, have a nice sleeping day hihihi ~